What’s in the Name of Michigan Park

What’s in the Name of Michigan Park

The city’s administrative boundaries are made without regard to the neighborhoods.  Michigan Park is divided among three police service areas (PSAs), 405, 503 and 504, from two Metropolitan Police Districts (MPD), 4th District and 5th District.  Five Advisory Neighborhood Commissioners (ANC) represent areas of Michigan Park – 5A02, 5A03, 5B01, 5B02, and 5B05.  The ANC, like the policy districts, are also divided between two larger administrative boundaries, 4th and 5th Voting Districts. 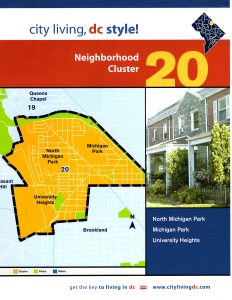 Real estate listings can be equally confusing as the advertised subdivision (ADV) reflects marketing strategies and is separate from the listed Legal Subdivision (Legal). 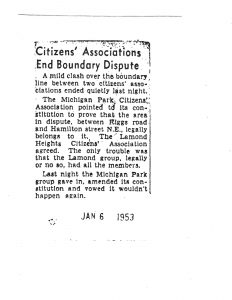 One last note. On September 16, 2016, the Washington Post published an article online related to neighborhood areas. Entitled, “North End of Shaw: Will it Stick like NoMa or Flop like SoMo?” by Perry Stein, it described the invented, fluid and evolving neighborhood names. see http://wpo.st/URCz1.