The Pledge of Allegiance was made. The draft minutes for October’s meeting were accepted as corrected. Treasurer Beulah Sutherland read the treasurer’s report.

Christmas Fund. President Conrad solicited members for donations to the Christmas fund which goes to the purchase of gifts for the children of a needy family identified by the Principle of Bunker Hill Elementary.

DDOT Invitation.  Mr. Conrad is coordinating a special meeting involving EYA and DDOT to discuss transportation issues surrounding the proposed development of the Saint Joseph’s Seminary property.  MPCA has not received confirmation for use of Ross Auditorium. Mr. Conrad will check with Bertie Backus or the Library, both on South Dakota Ave, for a room to host the planned meeting. 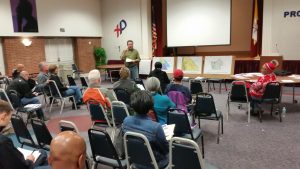 D.C. Board of Zoning.  Ms. Kathleen Sutherland had attended the set-down meeting and gave a quick recap.  The set-down meeting is a public meeting but comments from the public are not received. The voting commissioners were not enthusiastic but voted to allow EYA’s application to move forward so that EYA may be added to the agenda for public meetings. Concerns of the commissioners included traffic, density, building heights, building aesthetics, rooftop decks, and affordable (vs. market) rates.

Mr. David Conrad solicited members for their input to a draft of MPCA position regarding the proposed EYA development.  The draft was distributed and read. A discussion followed.

This entry was posted in Minutes. Bookmark the permalink.