From Forts to Forest: The Parks of Michigan Park

Out west, public lands come in massive size. The large state of Nevada, for instance, is mostly public land managed by the Bureau of Land Management and U.S. Forest Service. In Michigan Park, public lands come in much smaller size. Nevertheless, they have significant stories. The neighborhood’s public lands include the square, city block-sized Fort Bunker Hill Park as well as the narrow green strip between Eastern Avenue NE and the Maryland boundary.

What is now known as Fort Bunker Hill Park was once an earthen fortress, built in the early years of the Civil War in order to defend Washington, DC from a Confederate attack. While the small, hilltop fort never saw action, it is safe to assume that many of its troops hotfooted it a couple of miles north to assist fellow soldiers during the Battle of Fort Stevens in July of 1864. Indeed, “Johnny Rebel” entered the District of Columbia, skirmishing and causing casualties during the Battle of Fort Stevens. After the war though, the majority of DC’s dozens of Civil War defenses were decommissioned, their materials going up for public auction, the land going fallow in most cases. 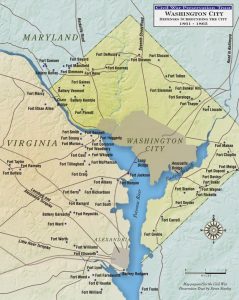 Figure One: Civil War Defenses of Washington, circa 1863. While many of the forts have been lost over the years, Fort Bunker Hill remains as a small park. Civil War Trust Photo.

Before, during, and directly after the Civil War, there was an increase in urban pollution nationwide. To combat this, certain landscape architects and public officials began calling for and designing parks. These parks were away from the city yet in the city. New York City’s Central Park was established in the 1850s and DC’s very own Rock Creek Park was established in 1890. In this same decade, in the beginning of what became known as the City Beautiful movement, some District leaders began calling for a scenic fort-to-fort drive that would link the national capital’s ring of forts together from the Palisades neighborhood clear over to the Anacostia River’s terminus into the Potomac. As such, over the next several decades, as much as appropriations allowed, Uncle Sam began buying back the fort properties as well as narrow corridors in between them.

Some of the historic forts were enhanced during the Great Depression. FDR’s New Deal programs brought some relief to millions of unemployed citizens, and the Civilian Conservation Corps actually formalized Fort Bunker Hill into a park in the 1930s. They planted trees and flowers, laid out a system of trails, created picnicking grounds on the park’s highest promenade, installed water fountains, and perhaps most significantly, created a 250-seat outdoor amphitheater.[i]

Indeed, from the late 1930s to the late 1970s, Fort Bunker Hill Park was utilized during the summer seasons as a concert and theatrical venue. National Park Service rangers regularly conducted nature programs and youth camps in the park, while Catholic University’s drama department regularly performed plays. The music group Earth Wind and Fire, created in the early 1970s, also performed at the park.[ii] 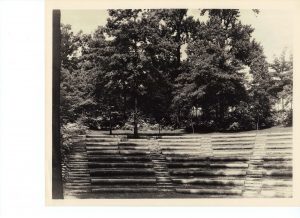 As a child, Ralph Bucksell, a lifelong resident of Michigan Park, remembers attending summer camps at the park in the 1950s. “The majority of DC was segregated at the time, but the camps were integrated,” he notes. When segregation finally ended, Bucksell remembers the feeling of anger with certain businesses in the neighborhood that had excluded him due to his black skin tone. However, the small Fort Bunker Hill Park has remained a happy memory for him to this day.[iii]

While the park was thriving, the Fort Circle Drive plan ultimately faltered. Over-eagerly perhaps, the Washington Post wrote in 1937 that only one more mile was needed and the city would have a drive linking the forts that would be “one of the nation’s most scenic and historic.”[iv] But essentially only a couple miles of the road were ever built. Perhaps part of the Fort Circle Drive failure was due to the larger capital beltway construction.

Removing the roadway from its plans, in 1968, the National Park Service, as the caretakers of the properties, proposed for and began planning a 24-mile paved multi-use trail. A small section in Rock Creek Park paralleling Military Road was actually built as part of this plan. Unfortunately for bicycle lovers today however, just like the Fort Circle Drive, a Fort Circle Trail ringing around the capital was never really built.[v]

To this day, the green spaces that were initially purchased for the Fort Circle Drive remain partially forested and partially grass fields that seem to go largely unutilized. Should playgrounds be interspersed in these public spaces to invite more recreation? Should hundreds of additional trees be planted to create an open forest in order to beautify the areas and remove carbon dioxide from the atmosphere? Should a trail of sorts be constructed? Should the landscape be left as is? I’ve heard friends and bloggers propose some of these ideas.[1]

Regarding Bunker Hill Park, the amphitheater and programming days are long gone. According to one local resident, the day the drama department pulled out of the park in the late 1970s, the park began a “long, slow process of deterioration.”[vi] With National Park Service staffing levels and appropriations decreasing, the decline perhaps continues to this day. Indeed, while mature trees now stand sentinel over the square park, invasive plant groundcover rules supreme in the understory, especially English ivy. Two dilapidating streetlights, water fountain remains, an earthen stage and a couple of stone steps leading up to it are remnants of Fort Bunker Hill Park’s heyday. 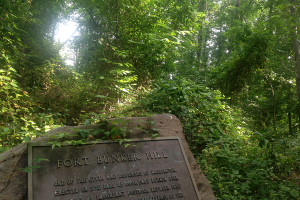 Figure Three: Civil War memorial stone in the park with both native and invasive plants behind. Such is the nature of the park today. Brookland Neighborhood Civic Association Photo.

But it’s not all doom and gloom. A small, resilient family of white-tailed deer now actually live in this formal park-turned somewhat wild nature park. And a Student Conservation Association crew removed some invasive plants and improved trail conditions in the park a few summers ago.[vii]