Hight intensity LED (light-emitting diode) streetlights, harsh on the eyes and likely detrimental to animal life, continue to be installed by DDOT.  These LET lights emit an unnaturally high percentage of blue-wavelength light of 4,000 Kelvins.  The American Medical Association (AMA) has warned that the blue-rich LED lights are are potentially harmful to human health because of their impact on circadian sleep cycles.  This is especially uncomfortable for those residents who prefer to sleep with their windows open and shades up during the cooler days. The AMA has also warned that blue-rich LED lights produce more glare than conventional lighting, creating a road hazard. The lights have been reported by residents to cause a burning sensation in one’s eyes. 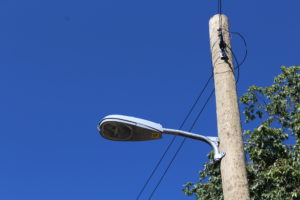 In May 2017, MPCA took a position in favor of the D.C. Department of Transportation adopt warm-white 2,700 Kelvin LED lights for all streetlight installations in the District.  At the time, the District had installed 71,000 streetlights with LED lighting.

Ms. Delores Bushong and Sharon Turner helped form The Street Light Task Force in December 2016 to inform residents in DC of the harmful health impacts of blue-rich LED street lights that DDOT is installing on our neighborhoods. The presenters stated that DDOT does not believe AMA’s proposal. The Street Light Task Force is seeking a moratorium on the installation of high Kelvin lights by DDOT and that our City Council required DDOT to use only warm-white 2700 Kelvin LED lights to retrofit those already installed.  A copy of the proposal with organizer’s contact information is attached.

This entry was posted in News. Bookmark the permalink.