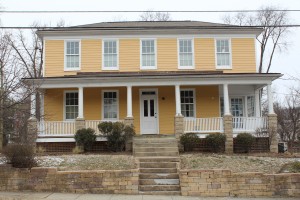 The Tucker-Means farmhouse features the High Style Greek Revival which became popular in the United States in the 1830s and 1840s. Key elements of this style include tall columns and pediments and a transom over the door. The house was built before 1857 on a farm in what is now Michigan Park. The farm stretched from Varnum Street (then known as Bates Road) along Michigan Avenue (then known as Bunker Hill Road) to just South of the new middle school at Turkey Thicket. The original owner was Enoch Tucker, who was both a city merchant and a farmer. Enoch Tucker died in 1869 and willed that his farm be sold and the proceeds from the sale divided among his children. By 1891 the farmhouse was owned by Lewis D. Means, a local farmer and cattle dealer. In 1900 or 1901 the Tucker-Means farm was readied for development, streets were laid out and constructed, and the house was moved to its current location on 12th Place and Upshur Street. The house is featured in “Rural Remnants of Washington Country: An Architectural Survey of Washington’s Historic Farms and Estates,” prepared by the D.C. Historic Preservation Office, 2013.